﻿
Rainbow cupcakes to brighten up any mood. Don't you think?!
I've been wanting to make these for a while, they're even on my "to-bake" list, sitting there patiently waiting to be striked off. But as always, I couldn't justify making them without any reason/occasion (although it was veeery tempting!)
Then came the occasion - my 3yr old daughter's friend's (as well as them being family friends) birthday. I decided the night before that this was the time for rainbow cupcakes to make their debut. And a 3yr old girl is the perfect recipient, especially as I had some fifi cupcake toppers left from my daughter's birthday cake. 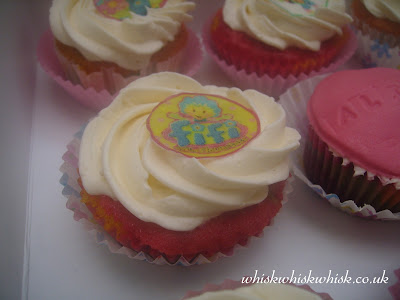 The cake was my favourite vanilla cupcake and the frosting was the utterly gorgeous vanilla Swiss Meringue Buttercream which you're probably bored of hearing the praises of! But I cant help it, it's sooo good! :-)
I had to put extra cases on all the cupcakes just before I boxed them up. I got some colourful cases from my local supermarket but they were terrible! Some of them started coming off at the cooling stage and had totally got soaked with the batter (Note to self: always make sure cases state they are greaseproof).

I sent 9 cupcakes off to the birthday girl, which means I had 3 cupcakes left for my two girls... ok, ok, for me! Well, don't want them to have a sugar rush now! :-)

But I couldn't be that cruel so I did halve one for them to have after their lunch. My 3yr old loved it, she loves rainbows. And my 1yr old...well, she just squished it between her hands and rubbed it on her face. Unfortunately, I don't have a picture because I was doing a mad dash to make sure she didn't get it all over her hair but it was a funny sight. 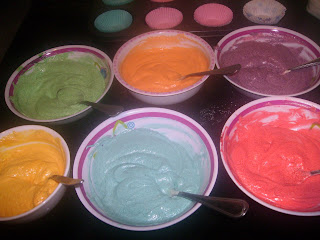 Yes, I know, I did six colours instead of the seven. I think the six colours did fine to represent a rainbow even though Indigo was missing. They were so fun to make and will definately be a hit with kids of all ages, even 20-something year olds like me!

The above picture didn't come out brilliantly but at least you can see the rainbow colours contrasting with the sharp white fluffy 'cloud' frosting. So fun and truly yum-yum!


I think I'll be making these again for my daughter's 2nd birthday in January - hmmmm..... [lightbulb over head] I might even possibly have a colourful rainbow themed birthday with a layered rainbow cake and rainbow cupcakes as favours. Just a thought, got a few months to mull it over.


My favourite vanilla cupcake recipe (from the Hummingbird Bakery cookbook)


2. Put the flour, sugar, baking powder, salt and butter in a free-standing electric mixer with a paddle attachment (or use a hand-held electric whisk) and beat on slow speed until you get a sandy consistency and everything is combined.

3. Gradually pour in half the milk and beat until the milk is just incorporated.

4. Whisk the egg, vanilla extract and remaining milk together in a separate bowl for a few seconds, then pour into the flour mixture and continue beating until just incorporated (scrape any unmixed ingredients from the side of the bowl with a rubber spatula). Continue mixing for a couple more minutes until the mixture is smooth. Do not overmix.

5. Spoon the mixture into the paper cases until two-thirds full and bake in the preheated oven for 20–25 minutes, or until light golden and the sponge bounces back when touched. A skewer inserted in the centre should come out clean.

6. Leave the cupcakes to cool slightly in the tray before turning out onto a wire cooling rack to cool completely.

When the cupcakes are cold, spoon the vanilla frosting (see next recipe) on top and decorate with hundreds and thousands.

My beautiful Vanilla Swiss Meringue buttercream, you can find it here
Posted by shewhisks at 2:52 am

shewhisks
I lurrrve baking, love mixing up different flavours for all things sweet! I'm a total foodie and proud of it, wish I could do the baking without putting on the pounds!! I would love to expand on my cupcakes and hopefully this blog will help me on my way, so people - watch this space!! Peeps, email me on whiskwhiskwhisk@hotmail.co.uk

I'm a proud member of